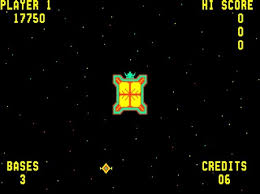 The Video Game that Made Me a Gamer: Space Zap

There is one video game I enjoyed so much, it led me to choose gaming as a favorite pastime. It was an arcade game called Space Zap.

My friends and I would go to this Sears that had a small video arcade inside. Since most kids hung out at the mall video arcades, the Sears arcade was like our own private gameroom because barely anyone except us would go there. This meant no waiting to play and we could play as long as we wanted… well, as long as our quarters lasted anyway.

One day a friend and I were there when the serviceman wheeled in Space Zap. Since he knew us, he left a few credits so we could try it out. It was love at first sight!

Space Zap, produced by Midway Games in 1980, was unusual for its controller layout and its premise. Consisting of a stationary “base” in the center of the screen, enemies appeared randomly above, below, left or right of the base. Players used their left hand to fire while the right was used for the directional buttons to aim your laser. Unlike other games, there was no flying or moving from side to side to avoid being hit, Space Zap depended solely on the player’s hand/eye coordination and reflexes.

As each wave grew progressively faster, enemies appeared only long enough to fire then reappear at another location. Eventually gameplay became less destroying enemy ships and more defending yourself from random fireballs coming at you from all sides. There was no discernible pattern the ships attacked in and as far as I know, no final level. Just keep shooting until your reflexes failed you and you were out of quarters. Which always ended up being the case for me.

Since Space Zap, I haven’t come across another video game quite like it. The button layout, and premise were unique for a video game. I believe it was the sheer thrill of man vs machine the game provided, that prompted me to become the gamer I am today. It did however, appear to also have a welcomed side-effect. After becoming really good at it, my baseball batting average improved drastically. Whether it was all the hand and eye exercise or, it just boosted my confidence, I did get better at baseball.

Maybe it turned out that all those quarters were well spent after all!