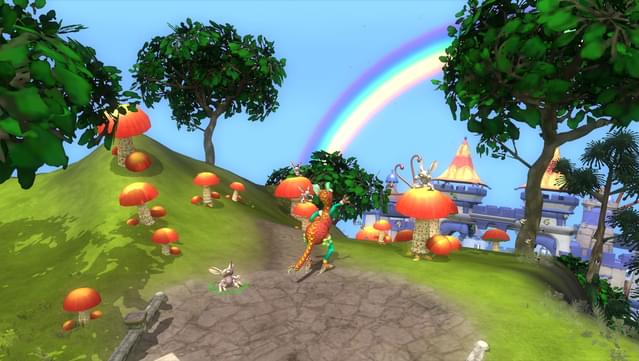 Spore Review – a Metaphor for the Evolution of the Video Game

When video game developer Ocean Quigley first suggested the type of game Spore would be, it seemed a daunting task. From the man who is the master of the “God Game” genre, Will Wright, Spore would be a culmination of many previous, and possible future titles. Even from the initial designs of the project, nobody could grasp the massive scope and amount of work that would have to go into this title.
EA’s Spore begins as a rock carrying microscopic organisms crashes into a planet. You are placed in an ocean of water as a microscopic single-celled organism. After selecting herbivore or carnivore, you swim around consuming your respective foods, avoiding other larger creatures. When you eat enough food, the organism grows slightly and the scope widens. This is rinsed and repeated about five or six times. All in all this stage takes about twenty minutes, and really feels like the opening scene of a movie (before the title is shown).

The second stage of Spore is called the Land stage. When this stage starts, you will be able to shape your organism from a 3D standpoint. Apply a weapon, legs, and eventually arms. You begin by walking out of the water onto land to create a nest (basically a base). You play this stage in third person and click to move, similar to a third person shooter. At this point, you may roam around a giant area of land, and encounter other creatures. You have the option to either socialize with the creature, or attack and attempt to make them extinct. Various creature parts are found scattered all over the area, and you may add them to the Sporepedia to be purchased with this stages form of currency, DNA. This stage is very difficult, and if not done correctly, death can occur very often.

The Tribal stage of spore is very similar to a real-time strategy game. You are given a certain number of units and you must create new units. To do this, you must find resources (food). In this stage, there are other tribes with different colors, and the goal is to be last color tribe left. This is accomplished by either socializing with everyone, killing everyone, or a combination of both. If you socialize, you will just convert them to the beliefs of your tribe and they will hand their base over. I felt this stage was fun, but felt myself wishing there was more.