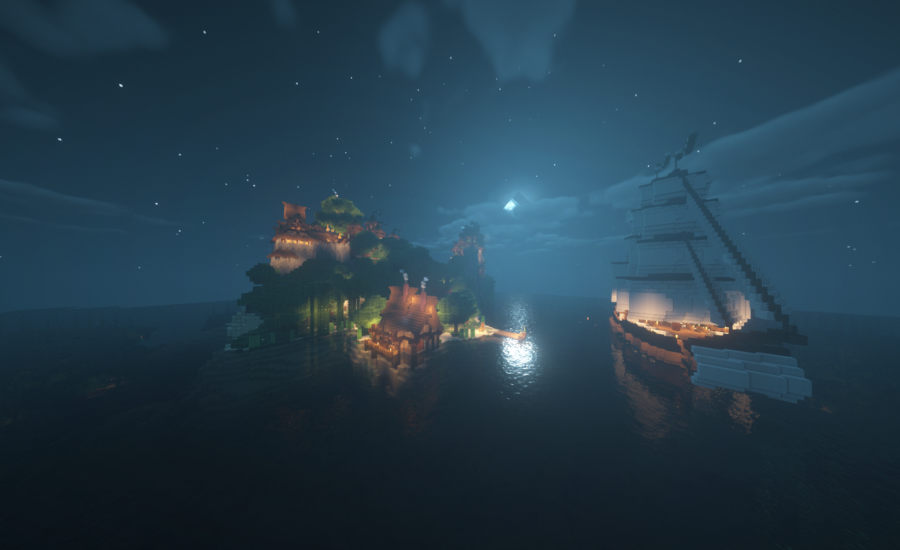 Shimajima: Minecraft Islands is a semi-vanilla, hardcore survival server. The world consists of a vast ocean with islands of various biomes. In the interior of each island, there is tiny starter village and a small bedrock platform (the “beacon platform”).

In addition to surviving as long as possible, your object is to claim an island, develop it, and eventually expand to other islands. You are given points for enlarging the village on your island, breeding villagers, putting in crops. etc. The more building you do and the more your villager population grows, the more “Island Points” you score. You are ranked on the server by “Island Points” and, because this is a hardcore server, by “Survival Time.”

When you spawn into the world, you will be dropped into the ocean. Because every island is protected until being claimed, you cannot use the islands to gather resources initially. Instead, to gather wood for example, you must find it elsewhere, in the ocean. Be careful: PVP is enabled everywhere at all times.

To claim an island, you must prove you are worthy of being an island owner by summoning and defeating a wither. Once you’ve obtained a nether star, use it to craft a beacon and place it in the beacon platform on your island. You now own the island and it’s fully grief-protected. Each island can only have one owner. Right-click the beacon to add members to your island and, when you’re ready, declare war on other islands!

Declaring war on other islands is the only way to expand your ownership to additional islands. If you try to claim another island outside of war, it will not work. To win a war, an owner must get to their opponent’s island and break their beacon. While all members of an island can help the owner in the war, only the owner can break blocks on their opponent’s island. So be sure to coordinate your war strategy with your island team carefully.