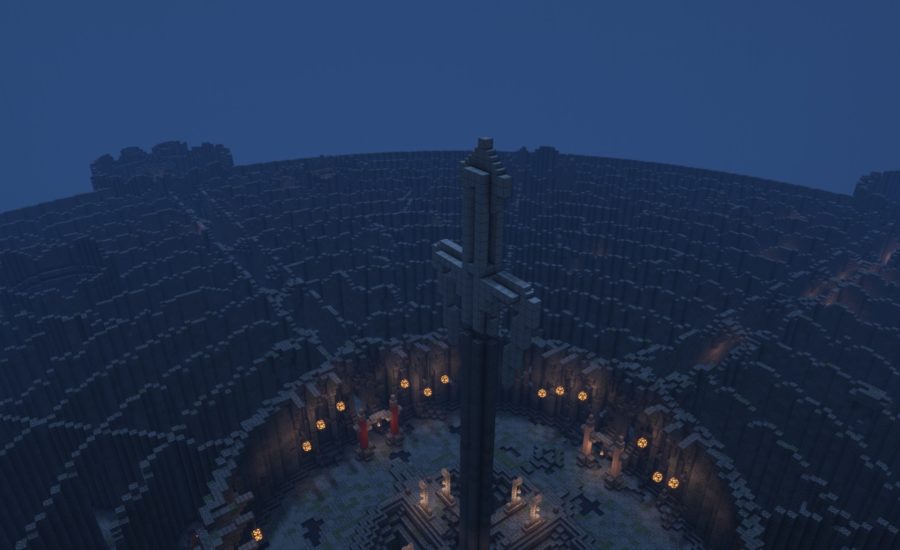 I wrote about the New 3DS Edition of Minecraft before, but in retrospect I kinda rambled a lot and didn’t clearly articulate just what it is that I like so much about this version of the game specifically.  Full disclosure, I’m gonna ramble a bit this time too, but I promise I’ll be more focused.  I really like the 3DS Minecraft, and I think it’s finally gelled in my head as to why that is.

Not everyone is going to agree with me here, but for me, Minecraft is a game that gets less cool the more complicated it is.  I’ve tried dozens of mod packs that add a ton of features and stuff to the game, and I always get tired of them pretty quickly and just go back to vanilla.  Once you’ve wrapped your head around the new systems introduced by something like Tekkit or Botania, something that becomes apparent is how a lot of these mods completely shatter the core sense of progression.  They also distract heavily from what I feel are Minecraft’s strongest elements: mining and crafting.  It really is that simple.  This is a game about digging, and building things.  When you start to pile more stuff on top of that, it becomes a different game.  Sometimes, that game is cool.  But it’s not Minecraft.

You might be seeing my point already, but let’s talk context for a second.  3DS Minecraft was made from a fork of the Pocket Edition, which would eventually become the primary codebase for the game, under the name “Bedrock” or just “Minecraft.”  Java Edition is now just that: Java Edition, a side project subject to eventual shutdown, just like any other “Edition” edition.

Bedrock has some problems, the biggest one being its tight integration with Windows, the Microsoft Store, and the Xbox profile and achievement system.  Microsoft has a deathgrip on Minecraft now, and I’m not okay with that.  I’m also not a fan of how locked-down and corporatized Bedrock is, with its Microsoft-style store that uses carnival currency to bilk children out of their parents’ money, and its total lack of mod support.  Not that I’m a huge fan of Minecraft mods in general, mind you, like I said above.  It’s just a principles thing.

Update: It has also come to my attention that most Bedrock servers that aren’t someone’s private Realm are in fact “casinos” aimed at using mobile gaming techniques / gambling hooks, to take kids’ money in exchange for skins, cosmetics, and “rank” that only apply to that particular server.  These things come randomly from loot boxes that can be bought with real money / “Minecraft Gold”, or bought directly for quite a lot of the same, and Microsoft gets a cut of all the profits.  I would encourage you to go take a look at some of these servers yourself, to see what I’m talking about.  They also maintain dummy hub servers with false tags on server listing websites, designed only to sneakily redirect you to the main ones (Lifeboat Network in particular does this).  If what you find in the server browser enrages you as much as it does me, please consider going here to tell Mojang/Microsoft what you think.

Even given those problems, I’m a firm believer in Bedrock, and I happen to think it’s the best version of Minecraft out there right now, for a number of reasons.  Given time, it will probably be the only version.  Mojang isn’t going to want to continue supporting two different codebases forever, especially when one of those is written in the notoriously shitty, unstable, and poorly optimized Java.  Other reasons to love Bedrock include rock-solid performance and framerates, truly massive draw distance (I can’t overstate how game-changing it is to be able to see so far), the ability to designate “ticking areas” outside of spawn, no combat update ever (thank Christ), useful maps and compasses since you can’t just cheat with F3, and redstone mechanics that don’t rely on a decades-old glitch that never got fixed!

Like, girls.  Guys.  People.  Listen to me for a second.  I love redstone, okay?  But do you have any idea how intimidating it is for people to learn?  Block Update (BUD) powering is an “accepted feature” in Java at this point, yes, because if they removed it now y’all would literally shit out all your organs and drown the entire internet.  And it does give us lots of options, sure.  I miss 1-tick pulses and hopper weirdness in Bedrock, sometimes.  Circuits can be heckin compact and designs can be heckin complicated using BUD power.  But um.  It’s a nightmare, also.  Imagine a world where you don’t have to draw big diagrams just to make sense of redstone!  Imagine a world where you can look at a device and instantly grok how it functions without needing to know obscure glitchy nonsense!  That’s Bedrock.  And yeah, circuits are bigger and you can’t do some things as elegantly.  Oh no.  Let it go.  Redstone is ultimately not what Minecraft is all about.  At the end of the day, Mojang have decided that it’s a fun nice thing to make certain tasks more convenient through simple automation, and not more than that.  Frankly, even as a redstone nerd, I agree.  That shit was getting completely out of hand and becoming alienating, even ableist.

Okay, so, a bit rambly but hopefully you can start to see the kind of person I am behind the keyboard, here.  I like my Minecraft simple.  I enjoy digging tunnels, making little buildings.  Making simple contraptions, running around looking at the world.  The farther you get away from that, the less I enjoy the game.

Enter the New 3DS Edition.  The version of the game so despised by the ungrateful player base that they ripped it off the wiki’s main page listing of editions the very second Mojang announced it was getting its final update, even though the Legacy Console Editions are still listed.  The bastard child, unwanted and unloved.  Well, I love you, New 3DS Edition.  I love you all, Other Ocean people who worked so hard to make this weird edition happen.  It shouldn’t even be able to exist, but it does, and it’s beautiful.  And thank you for the updates that smoothed out the framerate so much.  I’m not sure how you pulled that off, but it’s awesome now.

Here is a Minecraft that’s frozen in time.  No more rolling updates to clog up my SD card and wifi and suck away time I could be playing the game, making me restart new worlds all the time.  Here, we can sit and breathe and have peace knowing that this is what there is and there won’t be any more.  We can enjoy what’s there without needing to always have more, more, more, the endless consumer culture nonsense that floods every creative industry with gray paste sequels and prequels and remakes.  Minecraft 3DS Edition says, “this is enough.”

Here is a Minecraft that’s simple and true to its core.  It’s complete, too.  You’ve got little sprinkles of the fancier stuff, with The End, the Nether, the Wither, ocean monuments, elder guardians, all that good stuff, but no Update Aquatic with its annoying Drowned everywhere.  No Combat Update with its stupid swing timer and overpowered shields (update: I logged on like the next day after writing this and they added shields in 1.10 lol).  You can fly around on an Elytra (one of the best things in the game, if you ask me), brew potions, do enchanting, but not have to worry about fending off illager raid waves or whatever they’re planning now.

Don’t underestimate the benefits of a smaller world, either.  I’m pretty sure diamonds are closer together, for one thing.  The Nether is also small enough that I had my first portal come out literally inside a fortress for the first time ever.  I’ve never seen that happen before, how cool is that?  The odds of such a thing are much higher when your Nether is so small.

Here is a Minecraft that fits neatly and safely in my purse, a little world of mining and making things that I can carry with me anywhere and dip into in small bursts.  Open it up on the bus and get a little hit of that satisfaction of mining out tunnels deep under the earth.  Listen to the pop, pop, pop of picking up blocks.  That’s enough for me!  This is a Minecraft that calls you back to a simpler time.  It’s not infinite, but so what?  You were never going to roam very far anyway.  It doesn’t have all that bleeding edge content like cats and pandas and stuff, but so what?  How much are you really using those features?

The New 3DS Edition isn’t Bedrock.  It’s not the powerhouse of performance and polish that that edition is, and it never will be.  And that’s okay!  Having a simple little Minecraft time capsule is absolutely more than good enough.