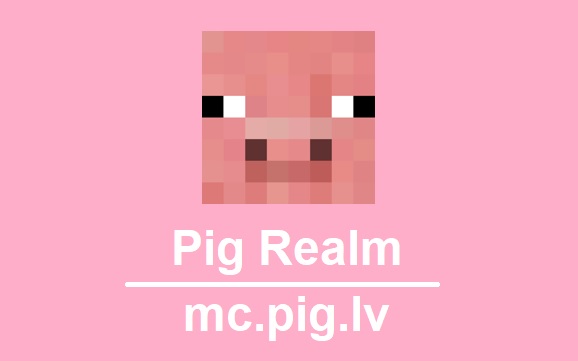 We are small yet united group of players looking to bring best Towny experience for our quickly growing player base. Pig Realm was made by Towny fans with love and passion towards the game.

Everything is made to be user friendly and easily understandable for players who have never played Towny before. Server is kept Free To Play and items sold in our store are purely cosmetic.

Everything is pig themed – pig related characters, pig server staff, pig themed builds and even players are able to play as a pig.

Any player is able to start a town and be its mayor. Mayors can invite residents to their town. After joining the town residents get assigned a plot by mayor where only they can build.
Players can earn money by joining jobs and selling resources to shop or by trading items with other players. Ranking system is based on Jobs and Skills levels – the higher are the levels the better rewards. While playing eventually players can earn cosmetic coins which can be used to purchase high quality cosmetic items. Cosmetic coins can be earned in various ways, such as – voting for server, buying from other players or participating in vote party. Server also has map enabled so everyone can view whole world and other player location from a skyview. Map is synchronized with Towny meaning all towns and nations show up colored in map.

Main features of the server are:
» Land Claiming – Start a town and invite new residents. Everyone can build their own dream house.
» Economy – Trade resources with other players using in-game currency. Everyone gets to make their own shop.
» Skills & Jobs – Train to gain cool abilities and get rich.
» Ranks – Pig themed rank system letting players to gain new abilities.
» Quests – Complete quests for extra rewards.
» Map – See the world from above.
» Vote party – Solve a maze to get rewards.